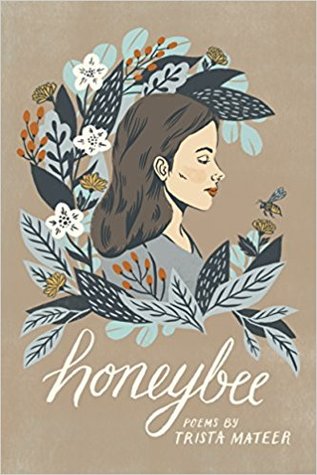 You will meet people in your lifetime who demand to have poems written about them. It’s not something they say. It’s something about their hands, the shape of their mouths, the way they look walking away from you.

Honeybee is an honest take on walking away and still feeling like you were walked away from. It’s about cutting love loose like a kite string and praying the wind has the decency to carry it away from you. It’s an ode to the back and forth, the process of letting something go but not knowing where to put it down. Honeybee is putting it down. It’s small town girls and plane tickets, a taste of tenderness and honey, the bandage on the bee sting. It’s a reminder that you are not defined by the people you walk away from or the people who walk away from you.
Consider Honeybee a memoir in verse, or at the very least, a story written by one of today’s most confessional poets.

Having been previously described as an “aggressively personal poet”, Trista Mateer takes this to heart and then to paper in her first collection. Presented more or less in the order it was written, the poetry in Honeybee is in turns bitter, tender, and messy. Following the course of a little more than a year, the poems showcased in Honeybee chronicle the on-again off-again process of letting go.

It wasn’t until I was half way down the rabbit hole of her incredible heart-break, that I realised the poems where in chronological order and when that hit me, it made the whole premise so much sadder. This encouraged me to connect and relate to the poems more.

For anyone who has had to leave someone that they love or been pushed aside, these poems perfectly quantify and describe those feelings that so often cannot be put into words.

In a world when poetry is often ridiculed and ignored, I admire poets like Mateer, who has made poetry “cool” again. She reminds me of Amanda Lovelace, Lang Leav and Rupi Kaur. I look forward to reading more of her work.

​Trista Mateer is a poet from outside of Baltimore, who could be living anywhere by the time you read this. She moves too much to remember to update her bios!

Mateer is known for her eponymous blog, started in 2013, which primarily chronicles her romantic endeavours in the form of free-verse poetry. This has seen her branded as an “aggressively personal poet,” but her confessional style has also made her writing relatable to thousands of readers worldwide.

In 2015 she won the Goodreads Choice Award for poetry with her self-published edition of The Dogs I Have Kissed.

She is currently working as a freelance editor but still manages to spend most of her time Googling cheap air fare and writing poetry about things that don’t matter anymore.

Big thanks to NetGalley and Central Avenue Publishing for allowing my to read and review this anthology.